The invention of the world’s first marketed wafer-scale integration product, a 160 MB solid state memory back in 1988, won ‘Product of the Year Award’ from the U.S. journals Electronic Design (26 October 1989) and also from Electronic Products (January 1990).  You might not believe it, yet its physics was suppressed because was based on a cross-talk discovery that was heresy to the supposedly secure foundations of stringy speculation.  The original motivation was to avoid fatal risks from cross-talk, as explained in Electronics World September 2003:

‘… during the Falklands War, the British warship HMS Sheffield had to switch off its radar looking for incoming missiles … This is why it did not see incoming Exocet missiles, and you know the rest. How was it that after decades of pouring money into the EMC community, this could happen … that community has gone into limbo, sucking in money but evading the real problems, like watching for missiles while you talk to HQ.’

Back in the 12 March 1989 Sunday Times, the journalist Jane Bird interviewed the inventor, who explained it’s significance: each processor could correspond to a square mile of airspace, avoiding accidents.  The data transmission rate is crucial in this situation, and this is the whole point.  The inventor had come up with an empirical theory in 1967 which worked, but which disclosed problems in mainstream electromagnetic theory.  The latter was its undoing, apparently just because string theory was built by people who knew nothing about the particle-wave duality behind the physics of transmission lines, and who were certain it was all rubbish (despite working and making a multimillion pound product): 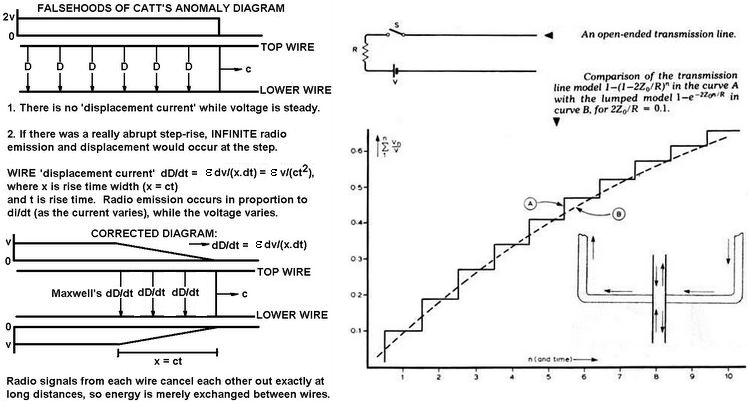 ‘In July last year, problems with the existing system were highlighted by the tragic death of 71 people, including 50 school children, due to the confusion when Swiss air traffic control noticed too late that a Russian passenger jet and a Boeing 757 were on a collision path. The processing of extensive radar and other aircraft input information for European air space is a very big challenge, requiring a reliable system to warn air traffic controllers of impending disaster. So why has Ivor Catt’s computer solution for Air Traffic Control been ignored by the authorities for 13 years?’ – Electronics World, January 2003, p12.

Weirdly, string theory is the main answer, as I found out from the responses to such articles!  It seems as if things go like this: traditionally, all theories are provisional and falsifiable (never proved) and people keep looking for errors. But when you move to unification, the theories which people claim to be unifying are then assumed to have been proved correct (I won’t discuss problems with the graviton here). If you merely point out (let alone correct) an error in the foundations, it then becomes a heresy, and you are treated as if you are a vandal.  Actually, the vandals are those who build on bad foundations and censor corrections.  Why on earth would string theorists, who can’t predict anything, want to be misleading the world into thinking that the transmission line mechanism has been officially resolved?  They don’t, and they’re not directly censoring it: it’s the community as a whole, as led by string theory, which is censoring it.

They just want string theory to be left with no alternative of a checkable kind. String theorists can always gain relative greatness by polluting or scorching the ground, as it were, so nobody else will be listened to.  You can’t make yourself heard over their hype, which is not based on experiments.  So are these deaths of kids from bad technology, maintained by insistence upon bad science, really necessary?   String theorists won’t, you can be sure, accept any blame for anything (nor do any dictators), and they will claim that their ‘physics’ is at worse harmless and a gallant effort.  I don’t see what’s gallant in a boring extradimensional system which leads people to sneer at live-saving innovations on the basis that the correct physics is based on experimentally confirmed data gathered after Maxwell’s equations had been developed, which contradict mainstream errors, and try to get them blocked from publication and implementation, not always with success:

I have in an old post an explanation of the correct mechanism of displacement current, replacing Maxwell’s mess with a proper quantum field theory consistent basis for electromagnetic crosstalk.  (Not discussed in the Catt paper mentioned above, which just uses some empirical rules about ‘energy current’ which ignores electric charge current and were developed originally by Heaviside.)

So is there a reason why virtually nobody listens?  Well, with all due respect to those who don’t like hearing the analogy to 1933-45 Germany, most people really do subconsciously (at least!) want to ignore the development of life saving innovations and the development of science, simply because they don’t understand what science is and don’t like it.  Those who don’t like science include people paid to do science.  They prefer stuff like string theory, and try to call that science.  Because of this muddle, the really fundamental science is censored out and endless speculations which are not science take their places in what used to be the most appropriate journals.  A political advocacy of eugenics in Germany at that time couldn’t be overrided by the facts, because virtually nobody wanted to hear.  Brainwashing is today replaced by it’s stringy equivalent, branewashing.  Low-level radiation is another example of a science being controlled by politics.

By the time the protein P53 repair mechanism for DNA breaks was discovered and the Hiroshima-Nagasaki effects of radiation were accurately known, the nuclear and health physics industries had been hyping inaccurate radiation effects models which ignored non-linear effects (like saturation of the normal P53 repair mechanism of DNA) and the effects of dose rate for twenty years.

The entire industry had become indoctrinated in the philosophy of 1957, and there was no going back. Most of health physicists are employed by the nuclear or radiation industry at reactors or in medicine/research, so all these people have a vested interest in not rocking their own boat. The only outsiders around seem to politically motivated in one direction only (anti-nuclear), so there’s a standoff. Virtually everyone who enters the subject of health physics gets caught in the same trap, and so there is no mechanism in place to allow for any shift of consensus.

To see possible consequences of the general stagnation and old-fashioned poor standing of physics in the student community, try this report.  When mentioning problem in Electronics World years earlier, my report was also ignored, and the problem became worse.  There’s a peculiar ‘shoot the messenger’ policy that deters you from pointing out why physics dictatorship by string theorists isn’t helping, and is in fact misleading almost everyone.  Quietly publishing the facts doesn’t really start much of a debate or get anywhere, when there is so much hype about speculation taking precedence which claims falsely that mainstream electromagnetism, even though it needs serious corrections for quantum field theory, is completely accurate and well established.  It’s the old story of people trying to run before they can walk: sort out electromagnetism, then you can start to build on that.  I should add that science is not personal property, and facts can’t be dismissed as merely personal beliefs or opinions.

24 thoughts on “Are there hidden costs of bad science in string theory?”