In the previous post, the Casimir force was discussed. It was discovered theoretically by Casimir in 1948 and experimentally proven in 1996 by Steve Lamoreaux and Dev Sen. Depending on the geometry of the situation, i.e., the shape of the plates, it can be either an attractive or a repulsive force. 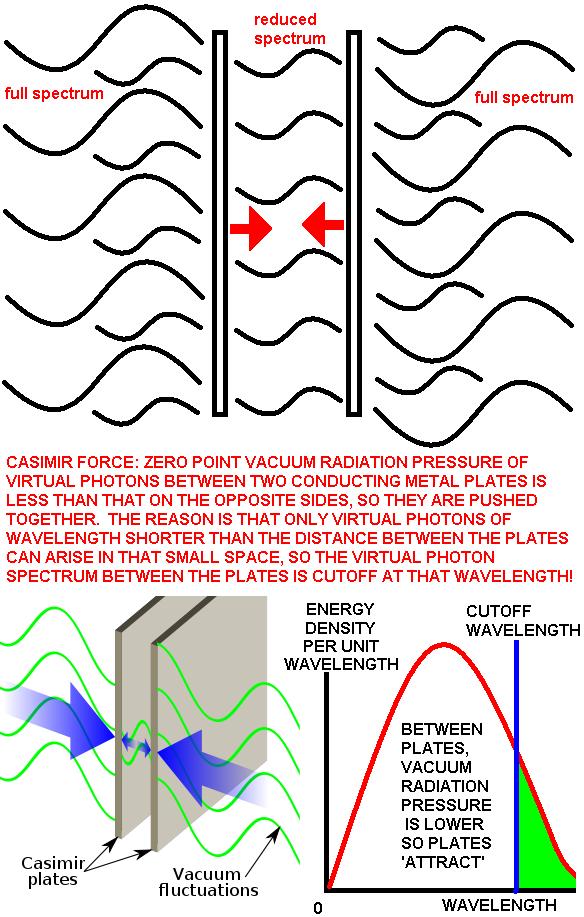 In other words, the shortest wavelengths of the “zero-point” (ground state) electromagnetic energy fluctuations of the vacuum bombard each plate equally from each side, so there is no asymmetry and no net force. Only the longer wavelengths contribute to the Casimir force, for they don’t exist in the small space between the plates but do bombard the plates from the outside, pushing them together in the LeSage fashion.

Looking at the Wiki page on the Casimir effect, they derive the Casimir force from the force equation

which we can use to formulate the basic (unshielded) QED force from Heisenberg’s minimal energy-time uncertainty relation, h-bar = Et.

This inverse-square law force is a factor of 1/alpha times the Coulomb force between two electrons (i.e. it doesn’t incorporate the polarized vacuum shielding factor of alpha).

The Casimir force calculation is considerably more complex. It relies on only wavelengths longer than the gap between two parallel metal plates pushing them together by acting on the outside, but not in between, the plates. According to the discussion of thie Casimir force mechanism in Zee’s QFT textbook p. 66: ‘Physical plates cannot keep arbitrarily high frequency waves from leaking out.’ This is one way of explaining why short wavelengths don’t contribute to the Casimir effect significantly: like very high energy gamma rays, they penetrate straight through the thin Casimir plates without interacting significantly with them. Longer wavelengths, on the other hand, are all stopped and impart momentum, producing the Casimir force. However, Zee’s explanation – just like his flawed explanation of Feynman’s path integrals using the double-slit experiment (where he doesn’t seem to grasp that the diffraction of the photons is physically caused by the interaction of the photon with the electromagnetic fields from the physical material at the edges of the slits in the screen, which doesn’t exist in the vacuum below Schwinger’s 1.3 * 1018 v/m IR cutoff) – is physically wrong.

Zee is wrong because if the shorter wavelengths were excluded from contributing by merely penetrating the Casimir plates, the wavelengths cutoff from the integral would depend not on the distance between the plates, but just on the nature of the plates themselves (their mass per unit area for example, as in gamma radiation shielding).

So rather than Zee’s theory of the plates shielding (stopping) long wavelengths and letting short wavelengths (high frequencies) penetrate by leaking through and thus not contributing, the Casimir mechanism must be one that explains why the wavelength cutoff is equal to the distance between the plates.

Notice that Zee is right that higher frequencies (shorter wavelengths) are more penetrating: I’m not disputing that. What I’m saying is that his shielding mechanism neglects to explain the wavelength dependence upon the distance between the plates.

The actual mechanism for the exclusion from the space between the plates of wavelengths longer than the distance between the plates is simply the waveguide effect. When you have a radio frequency resonator (source) and want to send the radiation to a dish antenna for transmission, you can pipe the radiation inside a conductive metal tube or box (a so-called ‘waveguide’) with an internal size at least equal to the wavelength you’re using. If the wavelength is longer than the diameter of the metal tube, the radiation can’t propagate: it is absorbed by the sides and heats them up.

What happens is that the electromagnetic radiation is simply shorted out by the waveguide if its wavelength is bigger than the size of the waveguide, since the oscillation of the electric field strength in the photon is transverse (perpendicular to the direction it propagates in), not longitudinal. (Ignore the usual obfuscating ‘pictures’ of a Maxwellian photon in textbooks, since they are one-dimensional and merely plot field strength and magnetic field strength versus the one-dimension of propagation. Anyone glancing at those pictures is misled that they are looking at a 3-dimensional spatial illustration of the photon, when in fact two axes are field strengths, not spatial dimensions! It’s as nutty as plotting a graph of speed versus distance for an oscillating pendulum, and claiming that the sine wave graph is the real 2-dimensional outline of the pendulum.)

On p. 66, Zee calculates the Casimir force to be

where d is the distance between the plates. Notice the inverse-square law! But the Wiki page on the Casimir effect calculates the following for the Casimir pressure (force per unit area):

If both Zee and Wiki are correct, then the effective area of the Casimir plates will be the Zee formula for F divided by the Wiki formula for P: