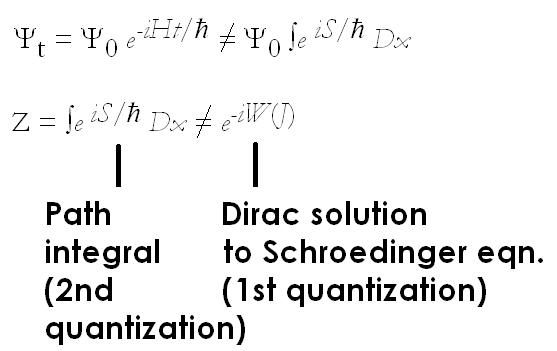 Fig. 1: the “not equal to” signs above are controversial, because according to status quo (dogma), exp(-iHt/hbar) from quantum mechanics is precisely equal to the path integral over exp(iS/hbar).  In fact, it is commonplace in quantum field theory to treat them as mathematically equal, so you Fourier-transform an action (calculated by integrating a quantum field lagrangian over time) into a hamiltonian to allow easy calculations (avoiding the path integral).  Zee, for example, claims to do path integrals while actually only using a single path evaluation, exp(-iHt/hbar), and then claims that his non-multipath, non-path integral mathematics is proof that the the graviton travels along the path of least action, i.e. directly between the two masses which “attract”, proving that gravitons are spin-2.  By the physical error of using as an input assumption in your calculation what you are trying to prove, you don’t prove anything other than that you are using a circular argument.  1st quantization quantum mechanics effectively states that there is only a single wavefunction for every “particle”, and this wavefunction’s amplitude is proportional the complex number exp(iS/hbar) = i sin(S/hbar) + cos(S/hbar), which reduces to simply cos(S/hbar) if you just want to know probabilities (from squaring the wavefunction and normalizing) and you aren’t interested in polarization vectors (which can be represented using the complex component, i.e. the angle with respect to the real axis on the argand diagram is zero for non-polarization situations).  You would however want to use the polarization vector when scattering two particles which each have a spin.  The spin vectors interfere either constructively or destructively, affecting the resultant cross-section in the S-matrix.  The mechanism for this spin effect is magnetic fields, but mechanisms are not usually discussed (preference is given to actually making calculations, rather than contriving a system of mechanisms that gives an understanding of what happens; likewise a magician who starts off by explaining his tricks is less revered than one who deceives).  Polarization effects also exist with light photons, and the complex amplitude is needed in the optical theorem, which is so beloved by Jacques Distler.  In the atom, electrons are paired with opposite spins, so complex vectors are used for the spin polarization.  However, for the case of calculating probabilities where spin vectors do not affect the S matrix, wavefunction amplitude exp(iS/hbar) effectively reduces to its purely real amplitude component, cos(S/hbar).

The electron doesn’t “orbit” the nucleus classically, because the Coulomb field that binds it to the nucleus isn’t classical, but instead is composed of discrete interactions due to the exchange of off-shell photons (observable only through the forces they impart) called “field quanta”.  Feynman explains this breakdown of classical mechanics in the case of an atom using the path integral in his 1985 book QED (which Jacques Distler in a brief discussion with me, kindly confused with Feynman’s 1965 book on path integrals – not mechanisms for quantum mechanics and optics – coauthored with Albert Hibbs).  Now, how does quantum field theory (2nd quantization, i.e. indeterminancy caused by random chaotic field quanta impacts on particles) differ from “quantum mechanics” (1st quantization, intrinsic indeterminancy/magic/non-mechanism dogma/”complementarity principle”/Bohring physics)?  Answer: multipath interference. In the double slit experiment, a transversely spatial photon (behaving like a skywave HF “radio wave” undergoing multipath reflection from different charged regions in the ionosphere) goes through two slits.  The part of the spatially extended (i.e. transverse) photon which goes on the slit with a shorter path length to the screen, arrives at the screen first (because the distance is shorter) and therefore is slightly out of phase with the remainder of the photon which goes through the other slit.  This causes the interference, just as it would with water waves which arrive out of phase and undergo amplitude (not energy) cancellation.  Energy is conserved.

Altogether it’s a complicated mechanism for indeterminancy.  But it’s reality.  So why is 1st quantization quantum mechanics – which ignores the mechanism of multipath interference for indeterminancy – still widely ignored almost 30 years after Feynman debunked it?  Magic.  Interesting controversy.  Feynman makes this point in another book, where he writes of his battles with the physics educational textbook buying committee in California.  They recommended a crass book which contained pictures of machines with the question underneath: “What makes it go?”  Feynman explained how enthusiastic he was to find this approach – thinking that the book would then go on to explain the mechanism for each of the machines.  Instead, when he turned over the page, the answer was: “Energy makes it go!”  Feynman explains this is crass, because it conveys no information whatsoever.  If something stops you can say that “energy makes it stop” (you use energy in applying the break).

The basic problem of “energy makes it go” is analogous to “the Heisenberg indeterminancy principle makes the wavefunction collapse” in quantum mechanics: it omits the mechanism.