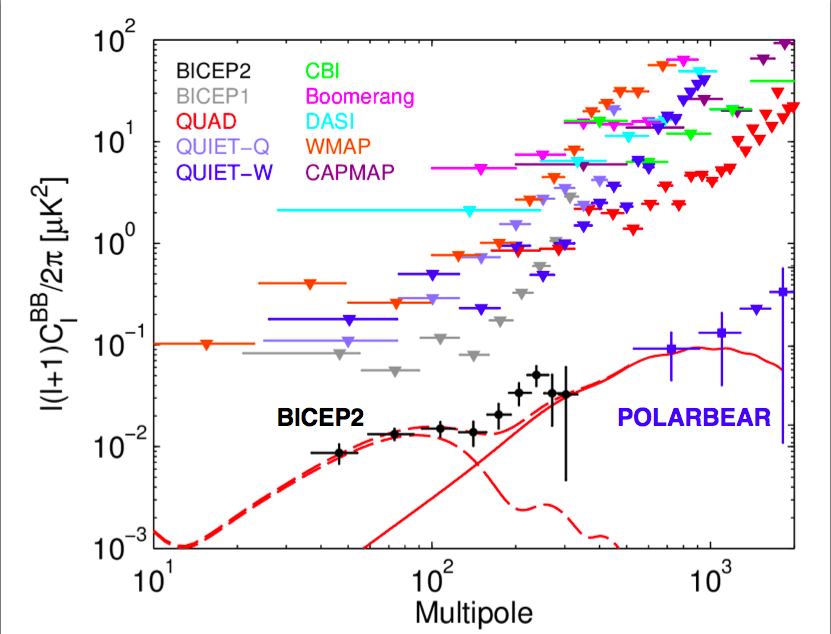 Lee Smolin astutely pointed out on Woit’s Not Even Wrong blog that the B-mode polarization of the CBR is more important for quantum gravity than for anything else: “we may have confirmation of quantum gravity effects before we have direct detection of classical gravitational waves”.

There’s a kids-level description of the very simple polarization of the cosmic background radiation (which is just a normal Planck radiation spectrum at 2.7 K temperature) in section 6.5 (Polarization of the Cosmic Microwave Background Radiation) on pages 121-5 of Luis Álvarez-Gaumé and Miguel Á. Vázquez-Mozo, “An Invitation to Quantum Field Theory (Springer-Verlag Berlin Heidelberg, 2012):

“The differential cross section of Thomson scattering we have derived is relevant in many areas of physics, but its importance is paramount in the study of the cosmological microwave background radiation (CMB). Here we are going to review briefly how polarization emerges in the cosmic background radiation and discuss why its detection could serve as a window to the physics of the very early universe. … Just before recombination [3000 K or ~0.3 kev temperature at 300,000 years after the big bang] the universe is filled with a plasma of electrons interacting with photons via [non-relativistic] Compton scattering [hence the low energy Thomson cross-section applies to the Compton effect, not the Klein-Nishina formula that is needed for higher energy, relativistic effects from 1 keV to 1 MeV when pair-production starts]. … so the approximations leading to Thomson differential cross section apply. … Since Thomson scattering suppresses all polarizations in the direction of the incoming photons we find that the two polarizations in the scattered radiation come from the ‘horizontal’ polarizations of the incoming photons …

“The previous heuristic arguments show that the presence of a net polarization in the CMB is the smoking gun of quadrupole anisotropies in the photon distribution at the last scattering surface. … Gravitational waves propagating through the plasma induce changes in its density with precisely the quadrupole component necessary to produce the polarization in the CMB radiation. [Lengthy calculation follows …] In other words, what we have concluded is that the measurement of the polarization of the CMB gives direct information about the quadrupole component of the distribution function of photons at decoupling!”

Dr Igor Khavkine, who you will remember is one of those who censored out my quantitative, fully predictive and proof checked evidence for quantum gravity (1996 prediction of the correct quantity of dark energy, first seen two years later), now writes at Not Even Wrong on 29 March 2014 somewhat ironically about the new B-mode gravity wave evidence and the big bang inflation hypers who seize it as proof of their particular non-existent “theory”:

“I’m not an expert in the various physical effects surrounding inflation. However, based on information provided in some of the presentations of the BICEP2 results, it seems to me that the status of the B-mode signal detection as evidence of quantum gravitational effects + inflation can be put on the same footing as the status of CMB temperature fluctuations as evidence primordial quantum fluctuations of the inflaton field. Indeed, the latter seems to be fairly well accepted and the two observations are indirect in similar ways. I’ve based the following on information from various talks I’ve attended and discussions with cosmologists. It would be rather hard for me, unfortunately, to dig up specific references. …

“In my understanding, the temperature anisotropies that we see (provided all foreground effects can be assumed to have been eliminated) tell us directly only about the photon times of flight (accounting for different amounts of red shift) from the surface of last scattering to us. These varying times of flight are then considered evidence for (classical) density fluctuations present at the time of recombination. The distribution of mode amplitudes of these fluctuations appears to be gaussian …

“Similarly, the observed B-modes tell us directly only the presence of (classical) gravitational waves at the time of recombination. Actually, already this point could be disputed, because the degree of directness depends on the ability to exclude other sources of B-modes. Perhaps magnetic fields could be another source, but the BICEP2 analysis team didn’t seem to think that it was likely. I’m not sure about all the reasons, but lets take that for granted now. Lets also presume that the distribution of mode amplitudes of these gravitational waves was also gaussian, with covariance matrix estimated from the B-mode 2-point function. At the very least, I have not yet seen anyone bring up any evidence of non-gaussianity in the detected B-modes. … If inflation did happen, then it would leave behind this kind of signature, as amplified quantum vacuum fluctuations: (a) gaussian distribution of fluctuations connected to the gaussian shape of the quantum vacuum, (b) “large” amplitude (large enough for the fluctuations to have become classical) set by the amount of expansion during inflation, (c) a fixed relationship between gravitational and scalar amplitudes as a function of frequency …

“So, in the absence of other pre-recombination physics that would generate signals with specific signatures (a), (b) and (c), the observations of temperature anisotropies and B-modes do point toward inflation, an inflaton-driven period of rapid expansion in the early universe. And, if inflation did happen, then the detected B-modes do in fact descend from amplified graviton quantum vacuum fluctuations. A similar thing was said, and widely accepted, of temperature anisotropies long before the B-mode detection. Of course, alternatives where a signal with signatures (a), (b) and (c) is not of quantum origin might be possible, but they’d have to be subject to investigation and testing like any other hypothesis. At the moment, the inflation hypothesis seems to be doing rather well compared to its rivals.”

You have a theory, let’s say inflation. At 10^{-32} second or so, fundamental forces decouple from an unproved grand unification (by which most of these political guys mean a communist “equality” of running coupling parameters), and the universe “inflates” faster than the velocity of light, thereby distributing the matter over a large volume and drastically reducing the gravitational field curvature.  That’s Guth’s “theory”.  Now there are many problems with calling it a “theory”.  First, there’s no proved grand unified theory for inflation.  Second, there’s no hard quantitative predictions, merely equations with unknown and therefore adjustable parameters, which permit (but don’t prove) epicycle-like fits to data.  But the worst thing is that the “theory” isn’t unique.  It has to be hyped with giant neon lights in order to deflect attention from rival theory that do better, predicting quantum gravity, dark energy and weak gravitational curvature at 300,000 years after the big bang in a quantitative way (including predictions of constants and parameters, which don’t need to be “deduced” from the data they are claiming to “explain”), unlike the adjustable (ad hoc or qualitative) equations of inflation “theory”.  In the rival theories, you get politics.  The biggest hyped rival theory is equally non-predictive nonsense, as is the third.  Only a totally ignored theory way down the list, which is censored out by all lying hype and neon adverts for the “top” theories, has actual evidence that replaces inflation!  But if you point this out quietly, you’re ignored, and whatever you say you’re ignored.

(In fact, if you merely point out that you’re ignored, you get angry ad hominem attacks claiming that you’re a publicity seeker or whatever, which totally ignore what you’re saying, and the “editors” refuse to edit or even make constructive criticisms.  They’re paranoid and bitter with anyone truly innovative, but like the censors in George Orwell’s fairy tale, they redefine works to try to convey those qualities on to the people whose ideas they refuse to check.  Innovators are then labelled paranoid and bitter.  All this simply wastes time and effort.  Trying to get through biased peer-review is a waste of everybody’s time, just like “peaceful diplomacy” with Nazis.)